Arantxa Ferrer is reaching the last stage of her EVS in Ciobanovca, a small village in Moldova, collaborating with the Association for Protection of Animals LOIZ. 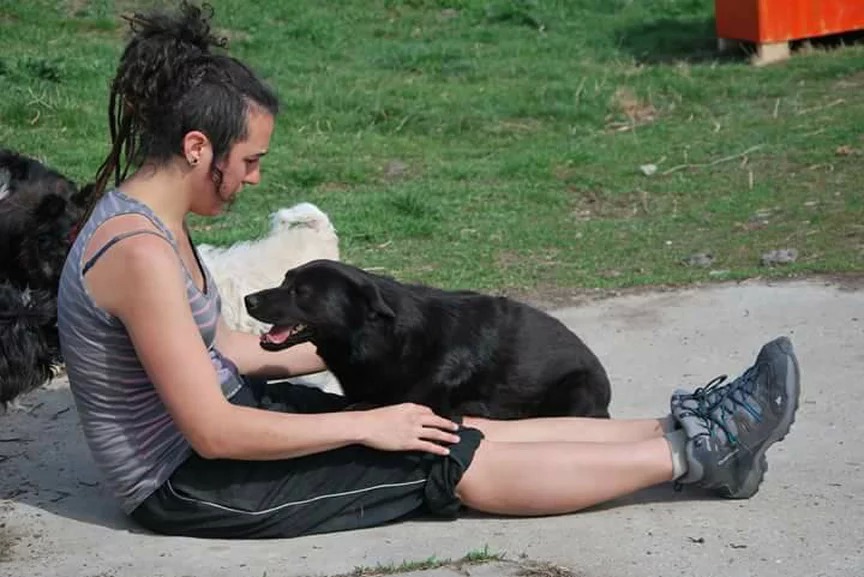 I’m Arantxa, a volunteer in an animal shelter in Moldova “The Island of Hope”, LOIZ with my sending organization CODEC vzw. I came here with Fred (Belgium) in August so I have still 5 months before to come back. In this time I could know a little about this small country. I have to recognize that I didn’t know anything about it before. I’ll introduce you a little. Moldova is a small landlocked country, situated between Ukraine and Romania. It is independent since 27 August 1991 (on this date there is a big celebration in the center of the capital, Chisinau!). The currency is the Leu, moldavian lei( 22 lei = 1€) and its economy is considerate the poorest in Europe in per capita terms.

I live in the countryside, 40km from the capital, in Ciobanovca. I come from a little village in Spain but, even if there is the same population (1300 habitants) it is very different to this. In the village we cannot find a town square where people could meet every day, but there are two shops/bar and people go house by house, invite the others to drink in their caves or in their gardens. The houses are surrounded by a big surface of land. People plant their own vegetables and have animals like chickens and cows. The animals don’t stay only in the house, they walk by all the village and come back home to sleep and eat. If you want to go out in the night don’t forget the lantern, because there are not lights in the street.

Something that surprised me a lot was the weather. When I arrived it was very warm, like 30º but in winter we had -20º. Now the spring is there again! The seasons here are very marked. You can beyond a doubt see the difference between them. The most important activity is the agriculture. They have winter vegetables and fruits, but also a lot of “summer products”! Many families have their own recipes and strands of grapes that have been passed down through the generations. If you come to the village don’t be afraid if they call you, screaming, to invite you to enter in their houses and to taste everything. You cannot say NO to anything.

We buy almost all our food in the market “Piatia Centrala”, in Chisinau. It is an open market very, very big, you can get lost among people. There you can find EVERYTHING; from intimate hygiene products to taps through loudspeakers and cabbages. The prices are lower than in the supermarket but you have to deal with the babushka.

I have to say that nobody speak English or French in the village (well, if you search a lot you can find someone who was once in England to visit a friend and learnt 4 words… but you have to insist). In Chisinau there are more young people who know languages, but here, in Ciobanovca, you have to learn Russian or Romanian (Moldovan) to survive. Ah, yes, in Moldova people can speak two languages, Russian or Moldovan. Usually they know both, but is very common that people only speak Russian because it was a part of URSS for long time. For us it was complicate at the beginning, we didn’t know any word in Russian but now I can decipher this language and express myself (more or less…). Romanian is much easy for us, it is very close to our mother tongues (French and Spanish) so, at least, we can understand and try to answer in broken Italian/French/Spanish. Now, little by little, the sign language is gradually replaced by the vocabulary.

There are two autonomous territories: Transnistria autonomous territorial unit with special legal status, recognized only by three other non-United Nations states but that has its our border, currency, police…; and the Autonomous Gagauz Territory, of which the capital is Comrat.

Regarding the work, we go 4-5 days per week to the shelter for 5-7h, but it is very flexible. There are 120 dogs and some cats and a lot of tasks to do. At the beginning it was very chaotic. We didn’t know what to do, the tasks weren’t clearly defined. We began removing herbs (hemp, which grows everywhere) and were approaching dogs little by little. Two weeks later we already knew almost every dog and could walk with them. After we started to clean the cages and bowls and to distribute water to them.

In regard to our house, the first month we lived in a host family in the village, with a woman and two of her kids. Sometimes it was very difficult; they only speak in Russian and a little in Romanian. We hadn’t really had a meeting with them and somebody who speak English to clarify the situation, so we didn’t know exactly what they expected of us, what we could do,… But, after a month, the director found another house in the village just for us two and we moved there.

If you want to travel don’t expect to find the schedule of buses on Internet. The best way is to ask people, to go directly to the bus station or to do hitchhiking (usually they expect you to pay them for the ride, but if you look like a foreigner, they can do it for free or ask more than normal, it is random). Anyway the ride costs about 20-25 lei for 40km (around 1€). You can widely travel with a small budget. The trolleybus in the city costs +-20 cents.

You also have the possibility to go to Bucharest by bus (8-10h, 13€), to Ukraine (Kiev by train 17h, 25€ or bus in less time and cheaper). The best choice to come by plane is to arrive to Bucharest or Iasi and take a bus to Chisinau. The most popular buses here are the Marshrutka/Rutiera or maxitaxi that will usually seat around 16 people with space for another 15 to 20 to stand while holding railing. In the real life more than 30 people can “fit” inside.

And, about the situation of animals in Moldova I have to say that there still much left to do. There are a lot of wild/stray dogs, in the city and in the countryside. In the village, there is at least one dog in each house, a “good guard” and, sometimes, a friend for the owner. We try to take as many dogs as possible but we have not places in the shelter. We try to disseminate the information and collect funds, to encourage adoptions and virtual tutelage. In some cases we only can sterilize the animal and put it back to the street (where the neighbors will take care of them). I’ve never could accept that before, but there are not too many options.

Well, that’s it. I hope you have the desire to visit this unknown but beautiful country. I’m sure the Moldovans will be waiting for you with open arms.